In any lawsuit, evidence is key. Spoliation, which according to Black's Law Dictionary (8th ed, 2004) is the intentional or negligent withholding, hiding, altering, or destroying of evidence relevant to legal proceedings is civil law’s counterpart to criminal law's tampering with evidence. According to the Federal Rules of Civil Procedure Rule 37(e), both plaintiff and defendant have a duty to preserve potentially relevant evidence from the moment they reasonably anticipate litigation. If left unheeded, Rule 37(e) can throw a significant wrench in the works: a party that is deemed to have intentionally or negligently destroyed evidence can be subject to an assumption of bad faith, a so-called negative inference sanction.

Carla R. Walworth, the co-chair of the ABA Section of Litigation's Electronic Discovery Subcommittee of the Pretrial Practice & Discovery Committee, told the American Bar Association: "[The negative inference sanction] leaves the jury free to judge the culpability of a person who destroyed evidence in the middle of litigation. (…) [The jury] is likely to infer that because they lied about the documents, they lied about other things, but the jury is given free rein to imagine which documents were destroyed."

Spoliation of evidence is one of the absolute worst things that can happen to a party during a civil suit, it essentially nullifies your chances to win instantly, with juries given the prerogative to imagine the worst-case scenario for you and assume it accurate. Here, we'll be discussing how to avoid spoliation, and how you can make sure that the assumption of good faith remains in place.

Here's what we'll cover:
What does it mean to be on a legal hold?
What triggers a litigation hold?
When should a litigation hold be issued?
Why is it important to create a Defensible Legal Hold Process?
4 Legal Hold Best Practices to Avoid Spoliation

What does it mean to be on a Legal Hold?

When litigation starts or can be reasonably anticipated (more on this later) both litigants are required by Rule 37(e) to begin preserving evidence. In the case of companies, storage costs, risk avoidance and compliance requirements have contributed to most organizations having data retention schemes in place. As Information Governance becomes more commonplace, so is the idea of not keeping data longer than absolutely required. The practice and process of ensuring evidence is preserved during a regulatory or legal challenge is called Legal Hold.

Whenever litigation is anticipated, counsel will endeavor to map out where potentially relevant data may be stored, which will typically end in a list of individuals who may be holding the data. These individuals will then be sent a Hold Notice, placing the data in question in a Legal Hold. Data that is in a Legal Hold should be exempted from any and all processes that may lead to it being deleted, altered, or otherwise changed for the duration of the Legal Hold. The individual receiving such a notice is referred to as a Data Custodian.

For a custodian, Legal Holds may be incredibly boring: you receive an email that tells you what to preserve, and who to contact if you have any questions, then, just don't touch that data until you're told otherwise by the people that sent the initial notification. At some point, depending on what data you're holding on to, you may be asked to deliver the data you are holding to the legal team. Sometimes, you won't hear anything and you'll simply receive an update telling you the matter is resolved.

Once the litigation is resolved, the Legal Hold is lifted and the data you were holding on to is once again subject to the regular Information Governance program: should it have been deleted weeks (or months) ago? You can hit delete now.

What triggers a Legal Hold?

For those who enjoy definite, straight-forward and easy-to-interpret language, the phrasing of FRCP Rule 37(e) can be frustrating: what does the Rule mean when it says "electronically stored information that should have been preserved in the anticipation or conduct of litigation"? Getting in trouble due to evidence being destroyed during the conduct of litigation makes all the sense in the world. Some discussion does exist, however, about 'anticipation of litigation'. Specifically, parties are told that 'reasonable anticipation' is the threshold that they should keep in mind when it comes to starting an internal Legal Hold procedure.

In some cases, the threshold will be met. If an accident or something else outside the normal business practices occurs which triggers significant accident or injury, that's a good time to begin sending those Legal Hold notices to the individuals involved. According to Monica McCarroll, organizations: "Should consider the implementation of a decision tree (…) that (1) identifies potential triggering events (based on the organization's litigation profile) and (2) documents the factors the organization will consider before (3) concluding whether its duty to preserve has been triggered."

Frustratingly, since there's no one-size-fits-all definition of what ‘reasonable’ is, however, 'reasonable' does mean that so long as you can explain your decision-making process in court, exposure to spoliation may be limited. Do ensure the decision-making is rooted in reality, however: no judge or jury is going to believe that you didn't anticipate litigation when someone who had their employment terminated walked out the door screaming "I'll see you in court!".

When should a Legal Hold be issued?

At the risk of sounding just as infuriatingly vague as FRCP Rule 37(e)'s 'reasonable anticipation', Legal Holds should be issued as soon as possible. As counsel, you do not want to be dragging your feet on ensuring evidence is being kept, especially in organizations where strict data retention schemes are in place. At the same time, there's no need to clamp down completely, with the FRCP specifying in the 2015 amendment notes: "[A]nother factor in evaluating the reasonableness of preservation efforts is proportionality. The court should be sensitive to party resources; aggressive preservation efforts can be extremely costly, and the parties (including governmental parties) may have limited staff and resources to devote to those efforts."

Despite some slack being provided by the notion of reasonable proportionality when it comes to the width of the net being cast, this is by no means a free pass.

Aside from moving quickly to show that, at the very least, a best effort has been made to preserve potentially relevant data, it's also important for counsel to make sure data custodians are understanding and complying with the Legal Hold notices sent. For such purposes, automated Legal Hold solutions typically include notification management features, that allow for tracking of acknowledgments, responses, and general progress. At all times, both parties in a civil suit are held by Rule 1 of the FRCP to "Secure the just, speedy, an inexpensive determination of every action and proceeding."

Why is it important to create a defensible Legal Hold process

In the context of Legal Hold, eDiscovery, and every other aspect of evidence (potentially) used in a civil suit, defensibility is paramount. As shown above, a considerable part of both the process relies on slightly vague concepts, such as 'anticipation', 'reasonableness', and 'best effort'. Regardless of the reason, efforts and policy, Murphy's Law still applies, which means that inevitably, some data will be subject to spoliation. Be it through a careless or unresponsive custodian, an unfortunately timed retention policy, or data being outside of the control of counsel.

For data outside of counsel's control, the 2015 amendment note to FRCP Rule 37 is quite clear: "Because the rule calls only for reasonable steps to preserve, it is inapplicable when the loss of information occurs despite the party's reasonable steps to preserve for example, the information may not be in the party's control. Or the information the party has preserved may be destroyed by events outside the party's control…" In case data is lost by a custodian prior to collection, for whatever reason, best efforts have to be made to recover said data from either other sources or through digital forensics per Rule 37(e). At the same time, as eDiscovery expert Brian Schrader pointed out during a webinar, the safe harbor provision detailed in FRCP 37(f): "With respect to litigation holds [Rule 37(f)] is saying that if for some reason you didn't issue a litigation hold, or a litigation hold wasn't done properly, you may not face sanctions if the data is still there or it can be recovered from another source." Finally, if a retention policy is ill-timed and ends up deleting potentially relevant evidence, Rule 37(f) still provides a way out, if the lost data can be sourced elsewhere. If not, then it becomes a question for the court: was the retention policy reasonable? Were the Legal Hold notices sent out in time? In other words, can the party that lost the evidence be held accountable for the loss or not?

Legal Hold isn't detailed anywhere in the FRCP itself, rather it is a logical consequence of legal departments seeking to be compliant with Rule 37. As such, maintaining a clear and consistently applied process for both Information Governance (this includes retention policies) and Legal Hold is key to avoiding an assumption of bad faith by the court. As the ABA points out, spoliation can have serious consequences for a case, so keeping things defensible isn't optional. 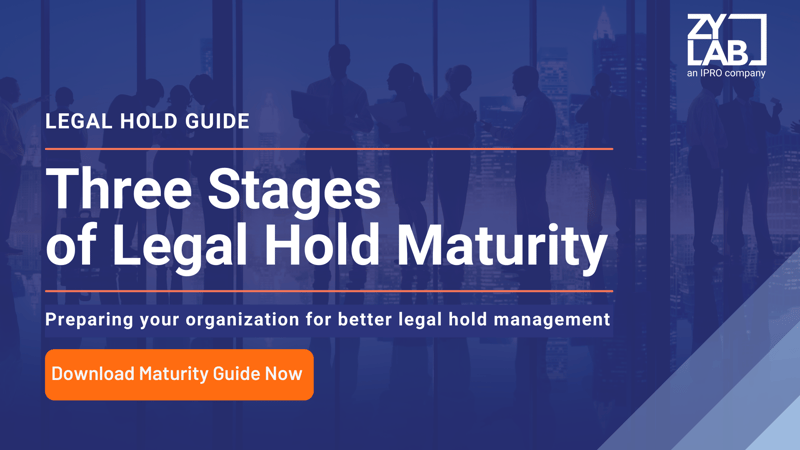 Conclusion: The Winner Takes the Spoils

While many aspects of a civil litigation process deal with how to win, Legal Hold and data spoliation deal with how not to lose. At their core, the Federal Rules of Civil Procedure aim to provide resolutions, with the 2015 amendments specifically aimed at reducing the time, cost, and effort that became increasingly associated with civil procedures over time. For Legal Hold, that meant that the issue of over-preservation had to be addressed: under the 2006 amendment rules that 'created' Legal Hold, the fear of potential evidence spoliation (with all the consequences thereof) had grown to such an extent that it became a cripplingly expensive process. By reaffirming the notion of proportionality and creating room for good-faith mistakes to be made, the 2015 amendment seeks to be a bit more lenient in its implied requirements for comprehensiveness and allowance for good-faith error.

At the same time, Legal Holds need to be taken seriously. With all the tools available today, the courts' interpretation of what is 'reasonable' may begin to incorporate use of technology to manage Legal Holds. The expectation laid out in the FRCP is still that both parties endeavor to identify, preserve, collect and produce relevant evidence. The adverse effects of data spoliation are still severe, and though the rules do allow for some more wiggle room than before, the smartest way around is to ensure that the Information Governance program and the Legal Hold process are well-maintained and thorough.